When last we left our hero, he was all hobbled up after having a typical Swanson day..this time by twisting his leg up bad. Well, it has been getting better but it was a loong week, not being able to get out and get some exercise...Personal diagnosis is that I hyper-extended my knee (way to far)..
Other than going to work every day, I did manage to get out a bit this weekend. I probably over did it, but I HAD to get some errands done. What did I have to do???
Well I HAD to find a guitar store (Howren Music)  and get some new strings for my guitar...I haven't picked it up much since my Canon took up my free time. Felt real good to plug it in and play.. 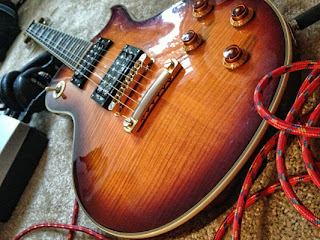 And I HAD to go find a camera store (Biggs Camera)...Didn't buy anything, but now I know where it is! It wasn't a wasted trip, because there was a park across the street and I had a semi unobstructed view of the downtown skyline. 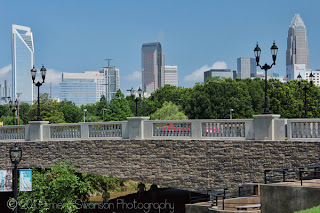 Not a great shot, but for once there weren't telephone wires in the way.
And note to Sue (who I miss badly and can't wait for her to get here)...there is a farmers market next to Biggs Camera, so we can go shopping together on the weekends. :-)
The final killer of Saturday was going to Walmart to get a cheap lamp to tide me over until the rest of our stuff makes its way to NC. That bit of shopping wore me out...So much so that I fell asleep early that night in my easy chair...with the lamp on...Woke up early Sunday. Tried unsuccessfully to go to bed but said the heck with it and went out early in search of something to shoot.
Went down to Piedmont row near my office and found lots of cafes with open tables...You can never find a seat during the week. But on a Sunday at 6 am, you can have your pick of tables... 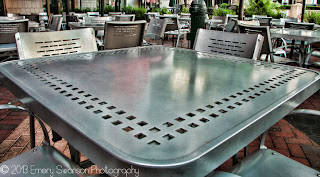 'Course, nothing is open that early, but you can get a seat!
I really went down to this area because of the buildings all around a courtyard and fountain..It's really pretty and I wanted to try a 'Little Planet' kind of panorama...Didn't turn out that great, but it was my first attempt. 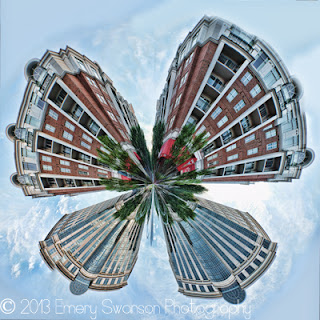 .
If you want to see how to do this, check out this link at PictureCorrect

As a last shot, I just wanted to show the crazy clouds that rolled in the other night. I was picking up some Chinese food at my new favorite restaurant. 1 minute there were Blue skies and 5 mins later, the skies were BLACK! I was afraid I wasn't going to make it home before the clouds opened up. But I had to stop and get some shots! I'm especially glad that I stopped because I found the ORIGINAL PANCAKE HOUSE (or so they claim). 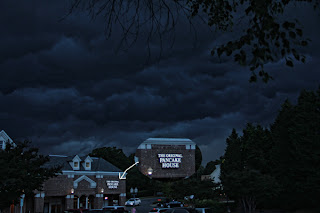 I'll check that out next weekend and see if it is my new 2nd favorite restaurant. I hope my leg heels fast because I'm going to put on 10 pounds very quickly at this rate.

Ok, gotta get some real work done now. Lot of deadlines due tomorrow at the office...

Have an awesome week gang. Miss you!
Em
.