This week I decided to give myself an assignment. Had no ideas off the top of my head, so I had an open canvas if you will.
Last weekend Jordan and I stopped at Subway to pick up some BMT's (on Parmesan oregano bread. mmm-mmm-mmm!) on the way to the Moultonboro Ice Races. While we were there, I noticed some wall art up in the store. And they were still life pictures of vegetables. Simple vegetables with white borders in black frames. They were really gorgeous! I can't explain it, but my eyes opened up a few years ago, and I started having the time to really "See" things. So I can really appreciate something as simple as a picture of a tomato. Anyway, I hadn't really tried "Food" photography yet, and I figured I now had my subject for this week's post.

So, let me tell you about vegetables..(Or VENCHTABLES) as my kids used to call them. I've never been a big fan. I mean I like potatoes, and corn. But anything else goes into the categories of "I don't get the big deal" to just plain "Yuck".
For example, Sue Loooovvvess PEAS. Me? I don't get the big deal. To me, all I can taste, is the butter you put on them. I don't taste anything else at all. So what is there to love? May as well just have a spoonful of melted butter.
And on the other spectrum, "Yuck", are brussel sprouts. YUCK YUCK YUCK. Stinky and gross. They were created just to torture kids.
And beets...Many people love them...But Me? They taste like dirt.
I don't know why I have this aversion to vegetables. My grandfather used to have a beautiful garden. Grew every kind imaginable. And I only liked potatoes and corn. My mom would always say, "Try it 3 times. If you don't like it, you never have to have it again". However, I think she'd say that 100 times for the same plate of beets. Yuck I really didn't want beets....My grandfather would say, "Mer fe vie. Which in Swedish means "More for Me!" I liked his thinking. He was a great man.
(Bloggers note: I cannot verify this translation...Can't find it online. But that's what it sounded like papa said. Maybe he was telling me I was a stupid kid for not eating my veggies)

So, now you have an understanding of where I stand on the subject of vegetables.
Anyway, my dearest pulled her back this week, :-( and asked me to accompany her to the grocery store. Me, being the chivalrous guy I am, accepted the painful assignment. As I've mentioned before, I'm not a big fan of grocery stores either. People are rude and they block the aisles while they sit and gab, and just ruin my day. I'm more of a Home Depot guy (or Lowes), where the aisles are wide, and everyone is happy, and the birds are singing, and everything smells like fresh cut wood. MMMMMM. Heaven!
But I digress. So when Sue asked me to go grocery shopping, and I said "sure", and "I want to buy lots of vegetables", she thought I'd fallen and banged my head! "Yeah, I want tomatoes, and Kiwi's and mangos, and..." - "First of all", Sue said, You hate tomatoes, and secondly, Kiwi's and Mangos are fruit". 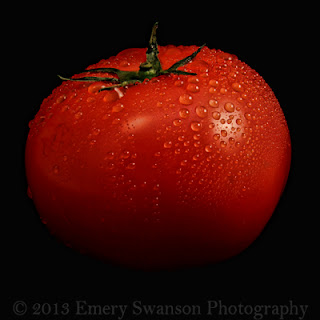 (bloggers note: let's not get into the "Is a tomato a fruit or vegetable" discussion. Please try and stay on topic)...

So after I let her wonder what had gotten into me for a minute, I admitted, "It's for a photo shoot"...
"A-HA! I should have known!", she exclaimed.
I thought I would expand into fruits also, and I'll explain why later. At Hannaford's, I went bustling about, having fun, grabbing this and that, not knowing what some of the things were. But I knew what tomatoes were! I grabbed this bunch of beautiful tomatoes on a vine. Bright red and green! Thought they'd make an excellent subject. I got back to the cart and Sue said, "do you know what you have and how much it costs?" "Yeah, 1.99!", I proudly answered. "That's per pound", she said. So I went and found a scale, weighed it...discretely put back my $6 dollar bunch of tomatoes on the vine, and grabbed a 69 cent single tomato. Hey! Gotta keep the business expenses low! Smart wife I have there! 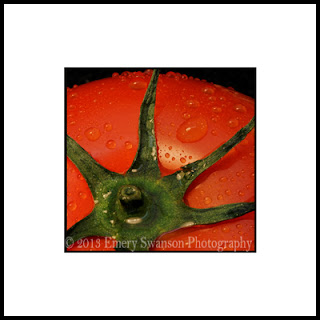 While I'm talking about my wife, let me get into that Kiwi and Mango story I mentioned earlier. Many years back, Sue was sick and asked me to go to the grocery store (See how she tortures me!), and pick her up some Kiwi's and other things. "Anything for you my love", I answered. (pouring it on a little thick probably). She gave me a neat list with items in order by aisle. I got home and proudly exclaimed that I got everything on the list! "Where are the Kiwi's?, she asked. "Right there!" I pointed... "Those are Mangoes", she replied. I said "No, they are Kiwi's and they cost 30 cents a piece and I got 3 of them". Sue looked at my receipt and pointed out that they were Mangoes. And I bought 3 at 90 cents a piece. "Oh...But they were in a basket that said kiwis, 30 cents each.." What do I know? Obviously, not much more than the grocery person who misrepresented his wares. So there is the Kiwi - Mango story that continues to haunt me to this day. :-)
And for future Reference:
So there is my tale....

How, did I take these? For still life such as this, I use a light box which I built. But you can buy them also. It is basically a cube with cloth on the sides and top. The cloth diffuses lights that are positioned on the sides and top. Inside, I use poster board or black felt as a background (which I used in these shots).


And here are some shots for extra credit: 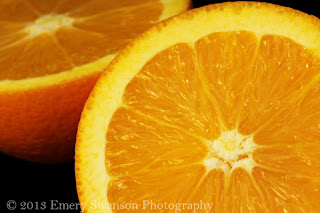 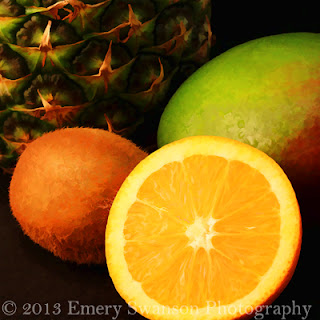 Have a great week peeps, and eat healthy!
Em
Posted by Emery at 8:43 PM 4 comments:

Ok gang, this week's assignment came from my Sister in Law, Terry. She thought she'd stump me by suggesting FISH in the middle of winter. Not so fast Terry, I win again...
So I thought I'd be clever and go to the grocery store. I asked the fish monger there, if I could photograph her wares. She chuckled and said I could. And here you go. Salmon? Smelts? Not sure. I was in too much of a rush to get out of there to find out what these were...Note to self: Write these details down..... 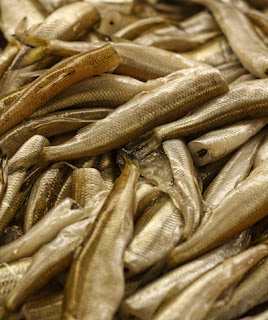 So, I'm already in the store with my camera and thought I'd be even more clever..But there were too many people around giving me a suspicious eye, so I just bought these and brought them home. 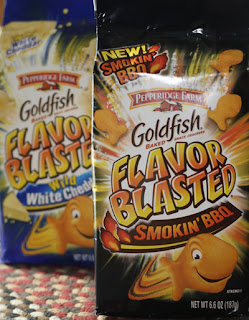 Didn't taste too bad...Ok, they were good!
Next up, Sue said I should stop by her office and take some pics of some real goldfish. 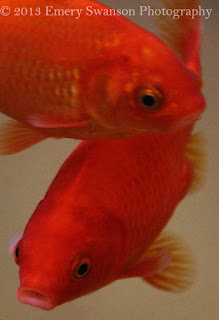 Cute little suckers. Though not quite as tasty.
Not wanting to call it quits, I went thru the archives, and found this from last year's fishing derby in Meredith. 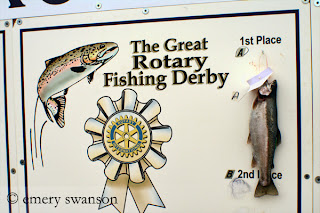 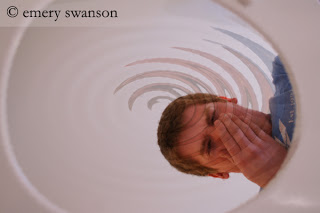 And while I was out and about last week in Manchester, I remembered the BIG Fish...at the Amoskeag Bridge. The salmon and Lampreys (Yuck) will be jumping up the ladders in another couple of months. Maybe I'll go back and check it out. And for your viewing pleasure, here I am at age 25 (a couple of years ago) with the biggest fish I ever caught. A 15 pound,  32 inch cod. Got this off of Marblehead, Mass, while I was deep see fishing with some buddies from Wentworth Institute. Going to have to get out this summer and deep sea fish again...Been a LOOONGGG time. 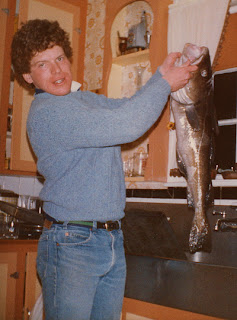 And lastly, here is a shot my daughter Ashley took of me, out on our pontoon boat on Late Winnisquam about 6 years ago. I'm working up a major sweat, and enjoying the day, as you know I know how to do. 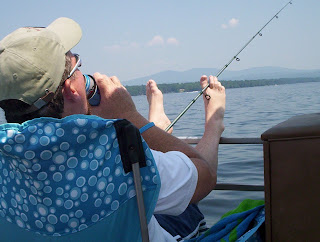 Well it was a busy weekend. It was nice to have that extra day off (Thanks to George and Abe). Sue and I painted the living room ceiling (3 gallons of paint), and I went to the Ice races in Moultonboro with Jordan, and then took a drive around the lake, and hiked up Lockes Hill with him. A great hike on a 20 degree day. And now my post is done. And I'm bushed.
Who will be the first with my next assignment? Ready...Set...Go!
Em
Posted by Emery at 3:33 PM 1 comment:

This weeks assignment was recommended by Lori P. Lori suggested Bob Houses, or Ice activities.
I was only able to get out one morning this week in pursuit of my shot. This shot was taken on Big Winnisquam, and as always, I'm not welcome...Didn't know the lake was private property. Guess we have a bunch of squatters out in those bob houses. 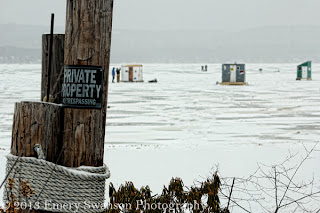 This shot was taken on Friday, and it would have been a great weekend to go get some more shots. They held the Great Winnipesaukee Ice Fishing Derby in Meredith this weekend. Unfortunately, we had out first big storm of the year, and had 2 feet of snow dumped on us. Oh yay. :-(  There was no going anywhere. And when we were able to exit the house, it was to shovel and snow plow the driveway....Have I mentioned before in past posts how much I'm tired of snow?

So I'm going to post some shots from last year's Winnie Derby when I was freelancing for the Laconia Citizen. I had so much fun doing that job. Covering sports and community events was a blast. Anyway, this time last year, I was on the ice in Meredith. I met some really great people. Here's some pics from that day. 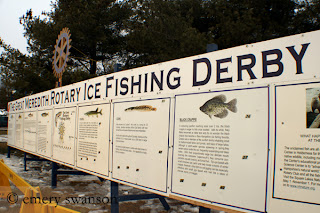 The Big board, before the start of the derby... 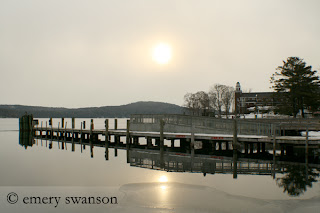 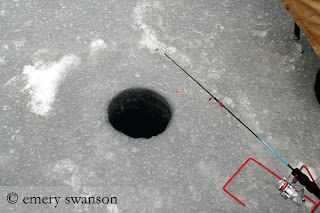 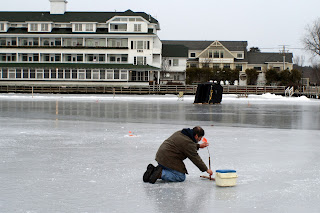 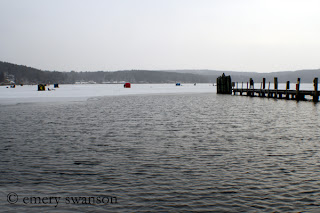 Alright...How and I gonna get out there? 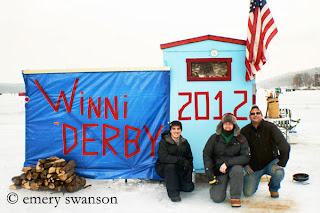 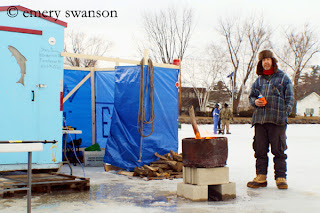 Still can't figure how you can have a fire on the ice...Hmm? 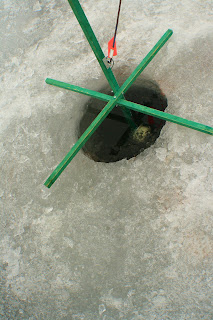 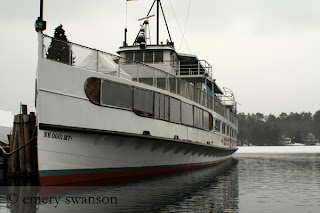 The Mount Washington, in Center Harbor

Had to stop freelancing due to time constraints with my main job. But who knows? Maybe I'll get the opportunity to do it again someday.

What's up for next week? I think Terry's wanted FISH....After that, I'll be looking for some ideas. So let me know!


This weeks Gem was suggested by my friend Jodie Clavett. Jodie said to get pictures of letters. And I assumed she meant all 26! I'm just thankful that I speak English and not Chinese, where there are thousands of letters.
Jodie said I didn't need to get them all...But I figured what the heck?

This was another toughie. But at least I had a handful of letters already on my hard drive. The pix below were taken in Michigan, Maine, and good ol' NH, 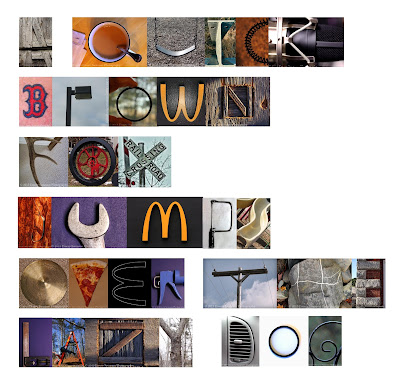 This phrase is a common one used to test keyboards, and for practicing writing, and has been used for almost 120 years. (Not by me - Don't be smart!)
It was a tough assignment but was a really good one. It forced me to look harder and closer at things. And now the assignment is done, but I was out for a drive with Sue earlier today, and that is all I can see - Letters! UG...

If you have any questions on any of the pics above, please shoot me a message!
And now, I've got to get ready for a Super Bowl Party, where we'll be rooting against the Ravens...We're still smarting after the Patriots loss a couple of weeks ago. Let's hope the commercials are good.

Next Up? Bob Houses, or Ice activity...
Have an awesome week!