Hey! I'm back!
Yeah, I know I've been away from blogging for a few weeks. Trying to take some time away from writing and to concentrate on photography. So what have I been doing along those lines?
Well my laptop crashed and I successfully rebuilt it with a new harddrive! Luckily I didn't lose any pictures because I back up everything to external HD and DVDs.
I had a Portrait shoot the day after Christmas, so I had to get those shots ready for my client.
I met with another client and have an assignment that I've been working on. Can't talk much more about that yet, but it would be a big boost for Emery Swanson Photography. Sorry to be cryptic, but don't want to count my chickens before they hatch.
Let's see, what else? I've been framing and getting my pictures ready for a showing in the month of March, and another in the Month of May. Where? Stay tuned!
I looked over the Art/Craft fair schedule for 2012 and decided that I'm not going to do any until the Gilford HS fair next December. There is just too much going on. I'll be away down in Weare all summer and have enough to keep me busy without adding fairs into the mix. I probably wouldn't have done the GHS one but they hook you in early. And they promised me a good location next time. My location last month was horrible, but in their defense, I didn't sign up til November!
Ok, what else?
I shot pics of 3 Presidential candidates (Paul, Santorum, and Huntsman-Ok, he has since dropped out)
I've covered 6 Basketball games and 3 Hockey games for the Citizen so far in January. 5 games total this week! Whew!
I sure do enjoy shooting sports, but find that I really need a faster lens. Indoor sports is tough due to lousy flourescent lighting and I have to do a LOT of post-processing adjustments in Photoshop (and Topaz!) It's not in the budget now, but who knows what the year will bring?
Oh, while I'm thinking of it, I wanted to mention this. I have my website at Smugmug, and printed some pics for myself so I could have samples of the different ink styles on hand. WOW! The work their printer does is outstanding. Lustre and metallic for the right image is unbelieveable. And the quality for matte and standard is beautiful. Just wanted to put a shout-out out for their print vendor (EZ Prints in Georgia, I believe)

Anyway, here are some shots I took this month: 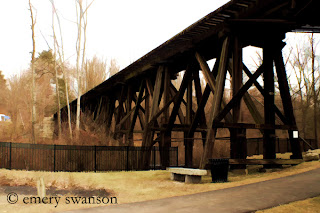 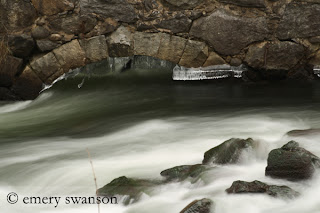 Along the River Walk 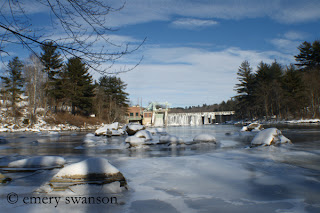 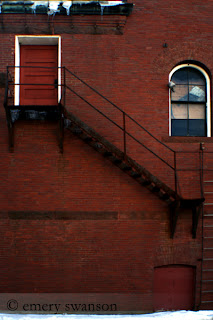 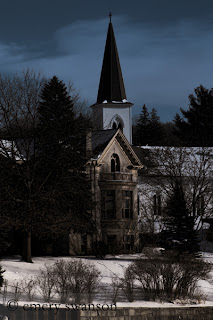 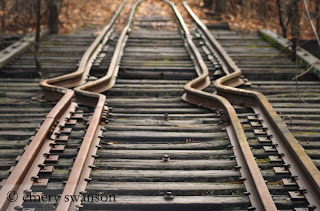 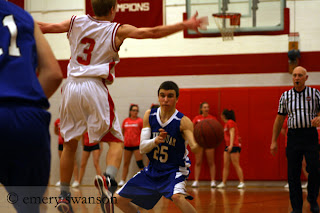 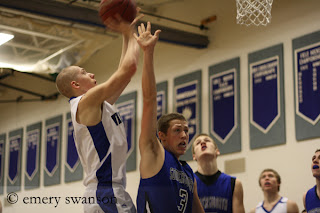 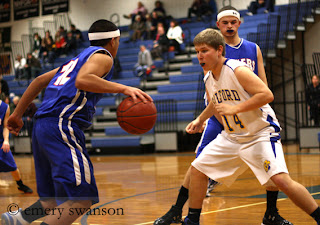 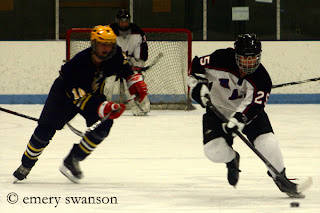 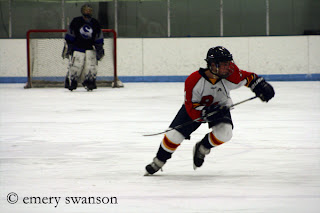 Belmont-Gilford vs Somersworth
What else have I been doing? Watching a lot of football! This afternoon included...Pats V Ravens...Going to be a great game (I hope!)

Had a busy night the other night, and thought it was a good subject for the blog. During one of my drives I recorded what I wanted to write on my phone. It was more or less a timeline of my rushing around...and then it all went downhill. Here's how it goes:

I have Camera Club meeting tonite at 6:30
Received an email from Citizen to cover the Winnisquam/Gilford Girls Basketball game at 6:30.
Sent an email to Carolyn at CC letting her know I won't be there. Texted Jordan and Ashley also.
Went home from work, kissed Sue, patted Bella, wolfed down some food.Raced to Gilford HS.
Enjoyed the BB Game, took some great shots (I hope). Gilford won 35-33. Game got out at 7:30. WOW!
Raced over to Library for Camera club meeting. Watched a couple of videos from Adorama.com. Got antsy because my shots are due by 9pm. So I left the meeting at 8.
Raced home and recorded this timeline while driving
Got home at 8:15,
Kissed Sue, patted Bella
Loaded disk onto my laptop..
Machine DIES. ARGGHHHHHHHHHHHH. NOOOOOOOOOOOOOOOOOO!
Yup, it finally bit the big one.
So for the next hour, I was trying to review my files on Sues Macbook, struggling trying to figure out how to get an image onto Mac Mail. (let it be known that I love iPhone...But hate apple Mac software in general)
Sent files to the Citizen,
Get emails back saying the pictures are too small and not like I usually send them. (DUH).
Finally got an email on my phone saying that such and such a picture was great, if I could send a bigger image they'd be all set. Figured out how to do that in the Mac. Had it over to them at 9:30.
Whew. Late, but in time for printing.
Anyway, This picture made the next morning's paper. I wasn't too happy with it, because I couldn't touch it up and thought it was a bit blurry, but my editor liked it, and alls well.
There was also another shot from the Kayak races on New Years. That made me happy. That shot is here:

So that is a day in this photographers life.

Epilogue: I was going to bite the bullet and go buy a new laptop. My buddy John said I should be able to recover and wipe the slate clean on my machine and start from scratch, so I decided to give that a try. Actually called HP support and spoke to some great guys (Ram and Sahid). Took a couple hours of my time, but yes, my hard drive is dead and non-recoverable. They are sending me a new hard drive. Cost?: $86! Woo hoo! Much better than a whole new machine! Told John today that I owe him a lunch...That's the least I can do.
Let's hope today is a bit quieter.
I'll let you know
Em
Posted by Emery at 10:04 AM 1 comment:

What a great way to start the year! Went to see the Kayak races in Franklin with Sue and friends Jim and Sheri. Was going for fun, but the paper assigned me to cover it. It was a beautiful day. 48 degrees! I got down and dirty laying on the rocks next to the river, and up and dirty, getting on the UpSide Down bridge (look it up!) and getting shots of the kayakers going under me. I hooked my leg on the trestle and hung over the edge to get some shots. I explained to Jim that my job is to get the shots that the average person wouldn't see. Not being afraid of heights, I had fun! The only problem with the beautiful weather was that the kayakers didn't have frozen faces. Well the other problem was that I had my camera on burst and shot about 805 pics. Then I had to review them for the paper. So here are a few...(Not 805!). 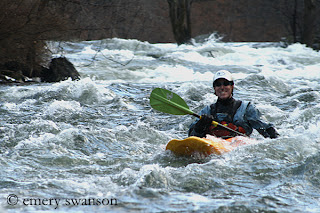 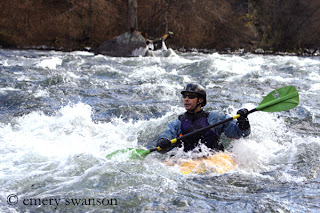 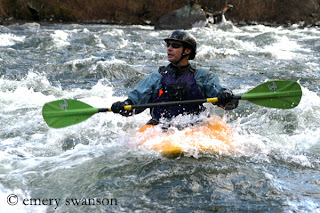 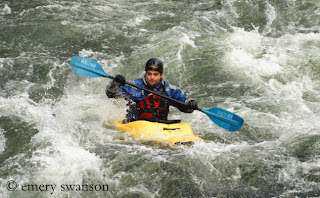 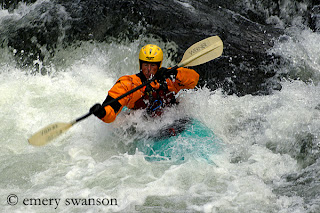 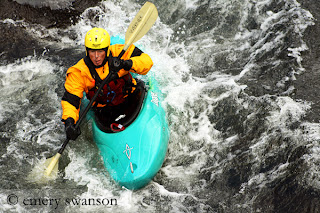 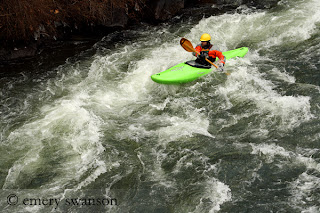 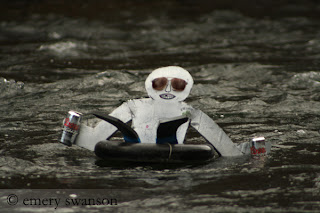 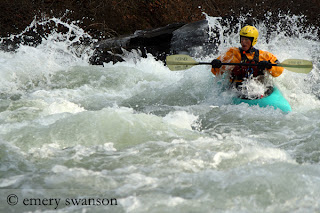 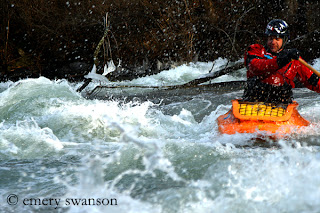 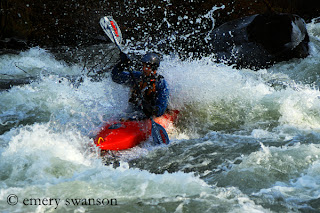 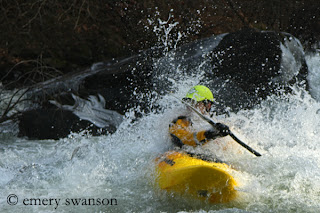 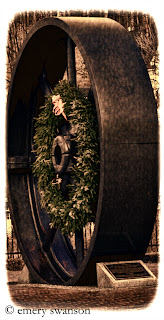 Mill Wheel in Franklin
Hope you all had a wonderful New Years too!
Em
Posted by Emery at 7:17 PM No comments: