So I planned on hiking Belknap mountain today. I've been wanting to get up to the Fire tower and get some shots of the mountains before the snow flies. Then I woke up early this morning and I was thinking that 1) My knee has been tweaking lately, and 2) it's hunting season...Then Sue was thinking the same thing that it probably wouldn't be a great idea. A photographer was shot and killed by a hunter a couple of weeks ago in NH. Well I was going to Walmart to see if I could find some blaze orange clothes, and happened to drive by Pheasant Ridge...There were cars there! So I stopped in and spoke to Jim the pro, and he said "Of course we're open". So...I made a 1:20 T Time and opted to do that instead of hiking. I mean I've already been hit in the head by a golf ball. What are the chances it could happen again? Safer to be golfing I figured. Made Sue happy...And I haven't golfed in a couple of months so it made me happy too. Called my buddy John, and he was happy to get out there too. Beautiful day. Nov. 20th and in the high 50's!
Anyway, we were out on the 5th hole, and there was a porcupine just sombering around the fairway. I happened to have my camera :-)  and got some shots. 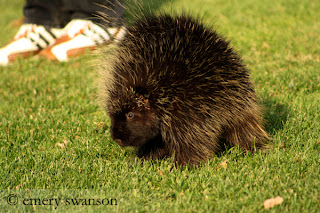 Those are John's feet in the shot. He sacrificed himself and got on the other side of the little guy so it would turn to face me. We were only about 6 ft away from it. Anyway, great afternoon with my buddy, and it was great to be out. Didn't get shot...Didn't get hit int the head with a golf ball...And didn't get stuck with Porcupine quills!
Talk to you on Monday
Em
Posted by Emery at 4:51 PM