This weeks photography challenge comes from a bright young lad named Jordan (aka son or bud), up in the frigid tundra of Gilford. Well Jordan's most excellent idea for this week was for good 'ol Dad to get some pictures of Animal Tracks. Great! What an awesome idea! One I hadn't tried yet! Good one son!

Ok, now the attaboys are done, and I realize that this is the coldest stretch of winter we have had in 3 years...It's been  between -7 and 6 degree this week around here. It hasn't snowed in a couple of weeks, and the snow on the ground is frozen and not conducive to allowing footprints... Thanks bud. Good suggestion...I owe ya one.. ;-)

We interrupt this Blog cast for this pop quiz: What made these tracks? Answer later on. 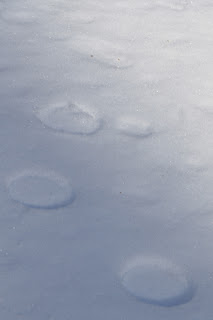 And now, back to our regularly scheduled blog.

Anyway, I started my search this week on Wednesday in Manchester. I think it was 7 degrees when I set out at lunch time. I was out for about 20 minutes before my fingers burned and I feared for the safety of my camera. I decided it was not a good idea to be out too long. I did however, find these tracks behind my office (That's the building on the left)... 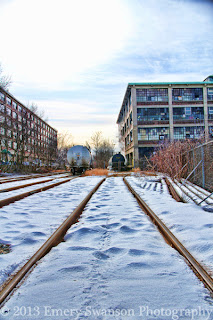 As you'll see with all of these pictures, the ground was too cold, and you can't tell what the animal was that made the tracks.
After that, I didn't get a chance to get out til Saturday morning. I figured I'd get up early before the sun rose and go over to the Tannery Bridge in Gilford. Maybe I'd see a deer or something. And I also wanted to get a shot if the bridge from the frozen river. So with a few layers on my bod and crampons on my boots, I set out. 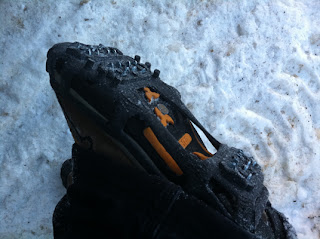 A must have for trudging in the snow and ice.

Right off the bat, I found foot prints everywhere. 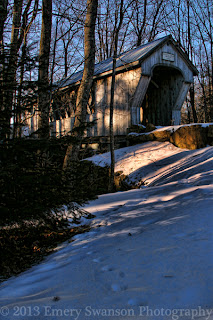 This was probably just a dog. Or Mountain lion. Hard tellin', not knowin, 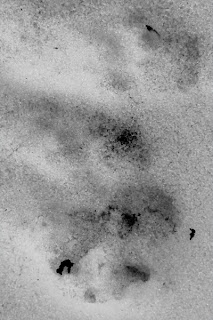 I followed them down to the river. 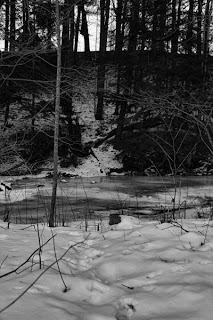 The river was mostly frozen. Not sure if the animal fell in or not. But it wasn't there now. Only found a hole. 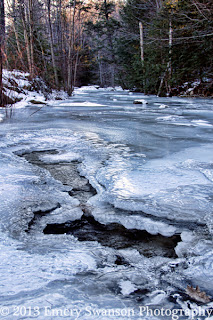 I very gingerly walked out onto the frozen river.  Boy, crampons are great! I laid down on the ice to get this shot. 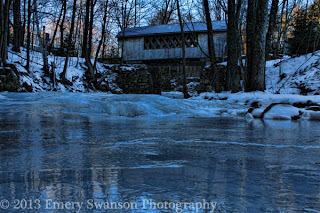 It was cool listening to the fast-moving water rush below me, under the ice. Well, Mr. ADD, forgot about animal tracks for awhile, and took a ton of pics of the bridge. I was out for about 1/2 hour in 4 degree weather, until my fingers hurt too bad. I headed back to the car and turned the heat on to defrost my digits. 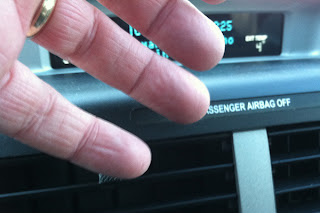 But before that, I took care of my Canon 60D...Here's a tip for taking your DSLR camera out in the cold of winter: It's fine going out, but coming back into a warm car or house can wreak havoc on the lenses and electronics inside your camera. A good idea is when you are done shooting, put your camera and gear inside a plastic seal tight bag before you get in your car. Keep it away from the heaters (Try the back seat) and allow it to warm up slowly. Then even when you come home, leave it out in a colder room (still in the bag),
for a couple of hours and allow it to warm up gradually. This will prevent condensation from getting inside your gear. Then you should be ok! I'm just wondering if I'll be warmed up by then. BRRR.

I was a bit disappointed at not getting many animal tracks. So I put on my thinking cap, and went to the grocery store. 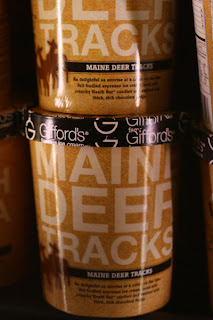 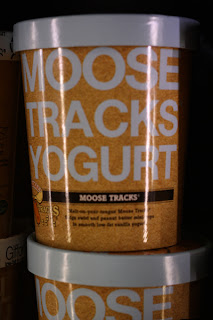 And now the answer to this weeks pop quiz. What made those tracks? 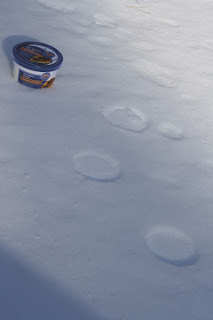 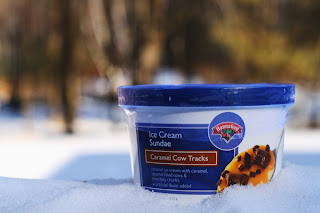 So for all my efforts, I found the most tracks right around my yard. If I had waited til the sun came up, I would have noticed. 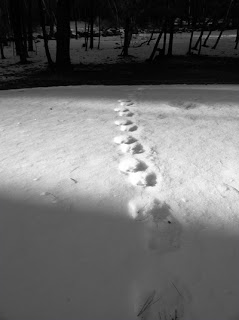 Where's this one headed? 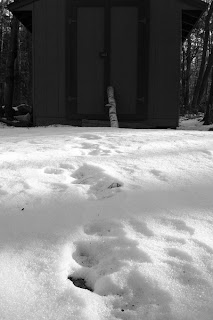 The tracks of some critter living under, (or in) my shed. 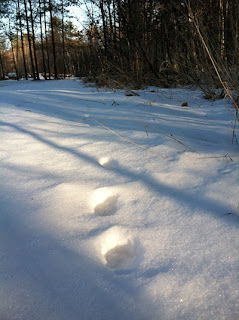 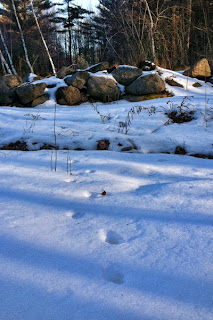 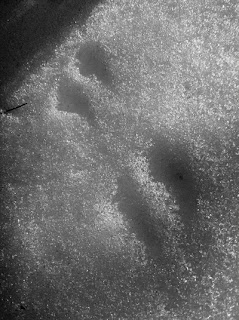 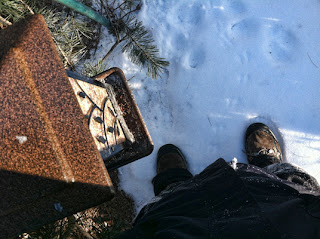 Something smaller, next to big feet.

And now, to sit and eat my ice cream, and look at the tracks through the window, from the warmth and comfort of my house. 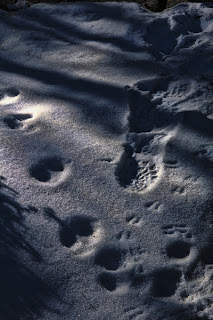 Allright! Week 4 is done! And now I have to get some pictures ready for some other things this week. Tomorrow I'm setting up for a gallery showing at Awakenings Cafe in Gilford. They will be there thru February. Jane Harmon, the owner, asked me if I'd like to have another showing. They went over very well last summer. So, I said absolutely!
So if you're in the area, get on over to Awakenings and have some coffee or freshly baked breakfast treats, and see some of my new stuff.
And I am considering joining NHPPA (New Hampshire Professional Photographers Association), and need to put a portfolio together. I went to their meeting last month, and really enjoyed it. A great bunch of people there.

So next week? What's my assignment? Let me know ASAP!
Have a great week!
Em
Posted by Emery at 6:22 PM