This was a much better week, despite feeling homesick. At last I've started to feel comfortable in the new job. Actually had a few days where I didn't have to bring work home. So by Friday, I was charged up and ready for the weekend and anxious to get out and take pictures. The last few months with the job search and move, I just haven't felt very creative. The desire to shoot was there, but I honestly was not 'seeing' anything. Photographers' block? Or just plains exhaustion? Probably a combination of both.


But this week I was ready! But where to go? I spent some time looking online for some destination, but was coming up blank. Then, I found a photo club in Charlotte!  They were having a photo walk the next day at the Lansford Canal state park in Catawba, SC. Only an hour away. Sweet! Signed up and made my plans for Saturday. I left with what should have been 1/2 hour to spare. Nope. GPS and the address from the website, led me to an empty field. ARGH! After asking around, I found I was only 6 miles from where I wanted to be...Welcome to the South! After breaking the sound barrier on some back country roads, I made it in time. I met up with the group ( a great group of people by the way) and off we hiked.

The goal of the hike was to shoot spider lilys. But it turns out that the peak season ended the week before. We did spot a patch but it was out in the middle of the river. Too far for any of our lenses, and too deep to wade out. So the group trudged on in search of something else to shoot. I decided to give it the ol' college try. I came to get pics of spider Lily's and I wasn't giving up that easy. I was going to find some way to get out across the river. I could try to wade, but what about my gear? I've been known to be accident prone and didn't want to drop it in the drink. What's an Em to do? 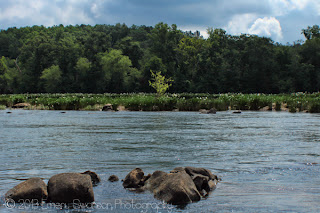 So I took off my sneakers, and crossed some small riverlets to a little island. Still not close enough. Waded out a bit more, but too deep. I turned and spotted a few lillies downstream not too far from shore. So I went back and trudged thru the woods, stepping on thorns and sharp rocks, got caught up on vines, etc. I even brushed up against a burning bush. Man they sting.. I haven't had that happen since my days searching for my golf ball in the woods on the 9th hole at Pheasant Ridge. Yeah, that happened once or twice. But I digress. Anyway, I'm out here stumbling thru the brambles, walking over bones.. (yeah Bones-Do I hear Banjo's playing in the woods?) 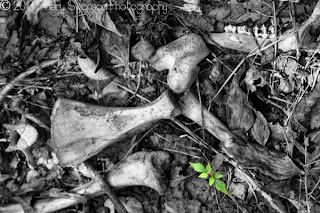 It was at that point that I said to myself "They build paths for a reason"..and yet I'm out here in the middle of who-knows-where, bleeding, and stinging. That's ok...I was on a mission! Anyway, I made it to where I only had to wade out 20' from shore just past my knees. And got this:

* No equipment got damaged during the shooting of this picture...

I never did find my group again, but we messaged back and forth online later in the day, sharing pics and stories. I was happy to find a good group to join! 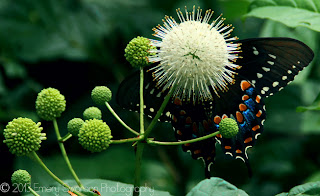 Sunday, was a day of rest. Drinking coffee and reading on the deck, followed by 2 hours of ironing. (Ok, not all rest), photo editing, and blog writing. This week there was all this talk on the news about a Supermoon on Sunday. So I planned on shooting that Sunday night. I have some software from TPE.Com (The Photographers Ephemeris), that shows you where the sun and moon will rise and set. It helps you plan your photo shoot, where to stand for such and such a shot, etc). So I planned on going uptown and getting the moon coming up over the skyscrapers.
Moonrise was at 8:55pm, so I planned on getting there at 7:30 an scoping out a good spot. Then, while watching the news they said "Hey, did you see that super moon last night?" It was at 1:55 AM. COME ON! Are you serious? Did I miss it? It was the night before. I went uptown anyway, and waited...And waited...And waited. Too cloudy. No moon at all! But I wandered around and took pics of the town anyway. 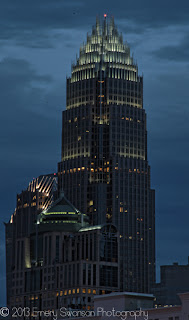 I headed home around 9:45pm, and 1/2 way home, this gold bit of light peaked out from the clouds. I figured I just go home and shoot it from my deck. But the clouds were back out and there was nothing to see till about midnite. And it wasn't super at all. Just plain average. But it gave me blog material!

It was a good weekend of shooting, and I'm glad for that. And now, back to work planning my next shoot.
Have a great week gang!
Em